On the passing of George Carlin

I was talking to my mom last night about George Carlin, the American comedic genius who died Sunday. I've always, always loved Carlin. Mom told me that she & my dad would let all of us kids watch his specials on TV, bad words & all. I don't remember that too much, but it's probably the reason we all hung on his every word during a performance. George Carlin made sense. Watching him made us feel as if we were in on a big joke and that it was okay to laugh at the stoopid people who didn't get it.
Here is a clip that encapsulates why George Carlin was the best there ever was. Rest in peace, George.
Posted by SP, here at 11:44 PM No comments:

.... And, we're back! Sometimes there isn't much to say so the best thing to do is keep quiet. Si o no? Rousing me from my posting slumber are the increasingly intriguing articles regarding the Obama campaign and the tussle of media access to the candidate.

I have to tell you, I've enjoyed watching how the Obama campaign handles the press. The moves are not intended to throw anyone off - or maybe they are. It's understood that the Public Has A Right To Know and that the news people Are Just Doing Their Jobs. I get that they are annoyed,  and that the life of a traveling press corp man/woman for the next president is not the best job in the world, except that it is. If it weren't so amusing that the Third Estate's feelings are hurt by the Obama campaign's message control methods, it would be maddening.
Where was their inquisitive zeal for The Truth when the Bush Administration was lying to everyone for almost 8 years?
Just sayin'.
Via TM's Poll Dancing blog, who got it from Politico, we learn of the plight of an important journalist from the Washington Post who was put in time-out during a fundraiser for Senator Obama at Ethel Kennedy's house. I met Mrs. Kennedy and her son Max while they campaigned here in Houston for Senator Obama before the March 4th primary. They were very kind and exceptionally thoughtful, so I bet the reporter was fed while she was there in the pool room. And besides, who knew that pool reporters were not actually kept in the pool room?
Honest mistake.
Posted by SP, here at 12:55 PM No comments:

Today is Father's Day. Happy Father's day to one and all. My dad is MIA, but I hope he's enjoying it somewhere. I have no doubt that he is.

Last night, we got together for my uncle Frank's 50th birthday party. He was surprised and had a really good time. It was a fun party. 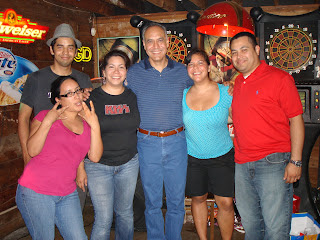 That's Uncle Frank with a few of his nieces & nephews.

Okay, back to my Sunday New York Times. Good Day!
Posted by SP, here at 1:11 PM No comments:

Texas is fortunate to have a base of young, talented and hard-working Democrats representing us at the Democratic National Convention this summer in Denver, CO. From SD6, IBEW Local 716 Organizer Turner Wright was elected to serve as a Clinton National Delegate. Congratulations, Turner! 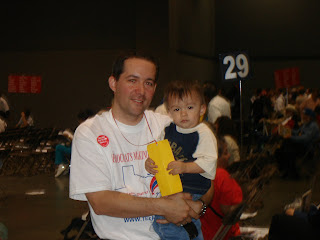 Remember, this process started on March 4th, just a few months ago. Running for Delegate takes a big amount of time away from family, work and other priorities. It's a big sacrifice! Since then Turner's been very active in the Party. His wife Ruth was there on Saturday with the kids, supporting Turner and graciously sharing her husband with a bunch of unruly Democrats.
The Wrights are now Denver-bound and deservedly so!

Here's Turner sticking it out at the SD6 Convention on March 29th in Houston:

Here is the first bunch of pictures from the Texas Democratic Party 2008 Convention. On Thursday night, brother & I attended the Texas Bloggers Caucus at the Cedar Door in Austin. Good times were had by all.  Friday was a business-filled day of caucusing, voting and electing delegates to office representing our Senate Districts. Saturday, at the General Assembly, TDP Chairman Boyd Richie was enthusiastically re-elected by a majority of Delegates.

Back from the TDP Convention

I am back, but my car is at the Dodge dealership in La Grange. That really sucks. But Mr. & Mrs. 140 scooped us up and gave Brother and me a ride back into town. Gracias a dios!
Jaimito took lots of pictures of our activities at the convention and I will post a few in the little while. Overall, the experience was enthralling except for a few minor problems that were resolved... eventually - and not always to everyone's satisfaction. But that's democracy for ya, baby. I was elevated to delegate status in my Senate Distrist 6 caucus and was then able to vote for officers. It was great to have been a participant in a little bit of Texas Dems' history.
Posted by SP, here at 10:56 PM No comments:

Gearing up for Austin

This week is the Texas Democratic Party 2008 Convention. My brother and I are driving into Austin on Thursday morning and staying with the YD's in a rent house. Given my in-between employment status, I am going low budget this one. So far, so good... Fair warning - I'm driving 65 all the way in, so you heavy-foot-on-the-pedal assholes with gas cards can just bite me.
In case I forget, let me make one thing clear: Texas Democrats must re-elect Chairman Boyd Richie. Boyd and Betty are loyal Democrats who provide steady and fair leadership for the Party. Shoutout to the Chairman and Betty Richie!
Posted by SP, here at 2:55 PM No comments: