There are times when, no matter how diligently we work, or how many hours we dedicate to the details, mistakes happen.

It happened to the Gene Locke campaign last Friday -- someone on the campaign sent a text to Locke text subscribers, in error, announcing, "Today is the last day of early voting!" Of course, it was not true - early voting continues until 7:00pm Friday night, October 30th.

Honest mistake, right? The staffer corrected himself immediately in another text message, and then that was probably the end of it.

Well, not so much.

I really don't get the tendency to play 6 Degrees of Separation with endorsements or supporters in a municipal election when the real players in the city have business that transcends party lines. Throwing around the "Republican" label doesn't have the impact it once did. It is a dying brand and, frankly, not the best weapon to yield when Republicans are barely a party anymore.

It is also really damn silly to suggest some sort of evil plot between Gene Locke, Beverly Kaufman, the Tax-Assessor collector's office and the cucuy to rig the election. Why are these over-zealous bloggeteers trying so hard to manufacture controversy when none exists? It's absolute lunacy.

What really gets me about this is that one particular blogger who talks more than her share of bullcorn is not even a Houstonian. She lives and votes in Fort Bend County -- so, please, tell me why anyone gives a damn about what she has to say.

Gene Locke needs a strong turnout in his base, which is a pretty solid foundation to work from, in order to pull off a victory. That's no secret, y'all. People who understand elections know that these claims of voter suppression are as ridiculous and nonsensical as they sound.

I'm voting for Gene Locke, Jolanda Jones and Ronald Green in upcoming November 3rd Election. I'm not revealing who I'm voting for in the other At-Large races.

I wholeheartedly support Alma Lara for HISD Trustee District 1. I believe North Side will hand the Heights' asses to them one more time this year.

I don't know what the hell it was, but Friday morning I woke up wretchedly, to be exact, and I called out to God to help me. I was sick. Maybe it was the food at Tecate or the skunky beer-on-tap at the Harp. Or, maybe it was a 24-hour bug that takes 48 hours of recovery. In any case, I lucked out. It's not the flu and it was nothing I needed to sit at the ER for.

I don't know whether or not I should get either of the flu shots. I joked to a friend that I want to get sick because it's great for the waist line. But after Friday, I changed my mind. I have had the flu before - at least twice that I can remember. The H1N1 is no joke -- it has already hit hard and close to home. So I will resist the pig jokes but will reconsider all things pork-related because I'm just a little grossed out right now.

I've been taking my vitamins, my allergy medicine, washing my hands and using the sanitizer like a crazy person. Everything gets sprayed down with Lysol. I can't afford to get sick!

This week, I'm taking on a new challenge. It's not going to be easy but I am ready to work and get this done. I think the sickness has now gone away so I'm ready to hit the field and turn-out some votes. I'll keep my exact whereabouts undercover, for now. We'll see how long that lasts!
Posted by SP, here at 6:18 PM No comments: 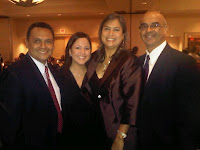 We had a great time at Roast & Toast. Jessica is a good sport and we love her for it. I was honored to "roast" her and raise a toast in her honor. Below is the text of my remarks:

The Jessica I Know

It was 2003 when I first became friends with Jessica. After redistricting, I was a new constituent of hers in the North Side. In response, she fled to Oklahoma. The soft-spoken rabble-rouser probably mapped the path to Ardmore.

I was soon a regular at her campaign events, at pro-choice events and I even worked for her at the Capitol. As one of her employees, I got the wardrobe lecture. You know the one -– No visible boobs, no toes, and no arms. “Show people you are serious about your job,” she said. “Besides, you wouldn’t want to see any Republican toes.”

And to clarify, there is nothing wrong with her feet. She wears those “nun” shoes because she’s working. I actually prefer them to her fuzzy, burnt-orange Longhorn slippers.

She expects her staff to work as hard as she does. At least we know there will be food!! Jessica’s office is like a FEMA center, and by that, I mean she will Feed Every (redacted) Around. (credit table 9 for that joke).

It is awesome to watch her on the house floor, especially when she’s fighting for women’s health care and she stands up to the men who think they know it all. I’d like to play this clip for you from 2007, during a floor debate on HB1098, when Jessica asks a know-it-all colleague a very important question about HIS opinion of women’s health care (redacted)

Jessica is hardcore, and that’s why we love her. Representative – It’s been an absolute honor to work for you and under your leadership for the people of District 148 and all of Texas. You are a wonderful teacher and mentor and I thank you for your guidance and friendship.

Jessica is scheduled to be honored by Annie's List in Houston tomorrow. Check their site for details. Everyone can keep the adulations coming, because Jessica deserves it all and more.
Posted by SP, here at 6:08 PM No comments: