It's been quite a week. Thanks to a few phone calls to AT&T, my internet is back up and functioning. It's about time! I must say that AT&T customer service is better than Comcast. I'm never doing cable again if I can help it.

After his inauguration, President Barack Obama wasted no time in reversing the ills of the Bush Administration. For more information on the President's executive orders, here is a link to the The Briefing Room with details about the orders closing Guantanamo Bay prison camp and lifting the Mexico City gag order.

This week, President Obama signed the Lilly Ledbetter Fair Pay Act of 2009. Newsweek has the details of Ms. Ledbetter's fight to be recognized as an equal to her male coworkers and entitled to equal pay for equal work. President Obama made it clear that this is a union White House and appointed Vice President Joe Biden to chair a task force on the middle class.

The president has his "BIG GAME" plate full with the stimulus package and getting those pissy Republicans in line. I don't get it. They were in power for 12 years in Congress. They pretty much had their way with Bill Clinton and a Republican president, their beloved W. Republicans have presided over two failed wars, record unemployment and a financial market on the brink of collapse.

Why the hell do we care what they say? Republicans have run this country into the ground. There is no good reason why anyone should take them seriously. Suck it, R's. Just admit that you are the reason this country is in bad shape and get out of the way.
Posted by SP, here at 1:40 PM No comments:

At last.... It's Inauguration Day! 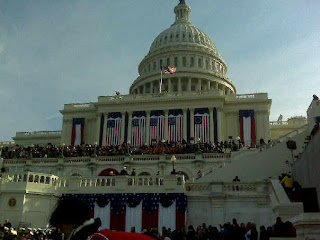 Today was a beautiful day.

The nice picture above was taken by State Representative Solomon Ortiz, Jr., from his vantage point at the Capitol. Lots of friends are in Washington, D.C. for the festivities and are reporting back on the Chron Inauguration blog, Witnessing Obama. Thanks to Isaac, Gloria, Annelise & Kara for sharing your experiences on such a special day.

On a sad note, Senator Edward Kennedy took ill today, and was hopitalized after suffering a seizure. Hope you're feeling better, Senator. It was awesome to see you smiling at the Inaugural ceremony.

Well, I'm going to watch some more coverage. Good night, y'all.
Posted by SP, here at 8:31 PM No comments:

An interruption is service is the reason for my latest prolonged absence from the blogging. I've missed y'all!

Since we've last "spoken," there have been a few developments in the political world.

The biggest story, by far, has been that of the election of Texas House Speaker Joe Straus III of Bexar County. A moderate Republican, Speaker Straus was elected unanimously on Tuesday, January 13, 2009. (Check out the Tweets for more)
You can find the link to the video of the first day of Session at the House website.

The third story dominating news is that of the Texas Senate's rules debate to allow voter suppression. The vote was almost directly down party lines, Democrats voting no and Republicans voting yes to exempt voter I.D. legislation from the 2/3's rule. Senator John Carona of Dallas was the only Republican to oppose the rule. I thank the Senator for doing the right thing even though it's unpopular in his party.

The fourth story involves that of guy whose acquaintenance I've never made, Vidal Martinez, and his disrupture of my life. He went to city hall and started the Crazy Talk, and then the special election was tagged. For Two. More. Weeks.
Oh. My. God.
Like Lee Harvey Oswald, I think this guy acted alone. It's too bad that he listened to the voices in his head and spoke out at council yesterday.

Joe Straus, III - The next Speaker of the Texas House


Harvey K. has a statement from Rep. Joe Straus of San Antonio on his list of supporters of his bid for Speaker:

“Since entering the House I have been guided by the very straightforward principle of representing my District first, while continually evaluating what is best for Texas – the way in which a democratic body should function.

“The needs of special interests and partisanship will take a back seat to doing what is right for our State at this critical time.

“It is time for a new tone and an atmosphere of trust in the Texas House of Representatives.

“Having received the commitment of a strong majority of my colleagues, it is my goal to restore civility, fairness and transparency to the House of Representatives and its public-policy making process.

“Speaker Tom Craddick has served with distinction in the Texas House for four decades. I have great respect for him personally, and honor his service to the State."

“In the coming days, I look forward to meeting with each Representative and discussing their district's priorities."

Here's the list (thanks to Elise Hu for posting on Google Docs):

Me, again. The prospects of having a PRO-CHOICE Speaker from a major Texas city is a big, big thing for Texas.

If this development holds, which I believe it will, it is absolutely a new day in the Lone Star State.
Posted by SP, here at 7:43 PM No comments: